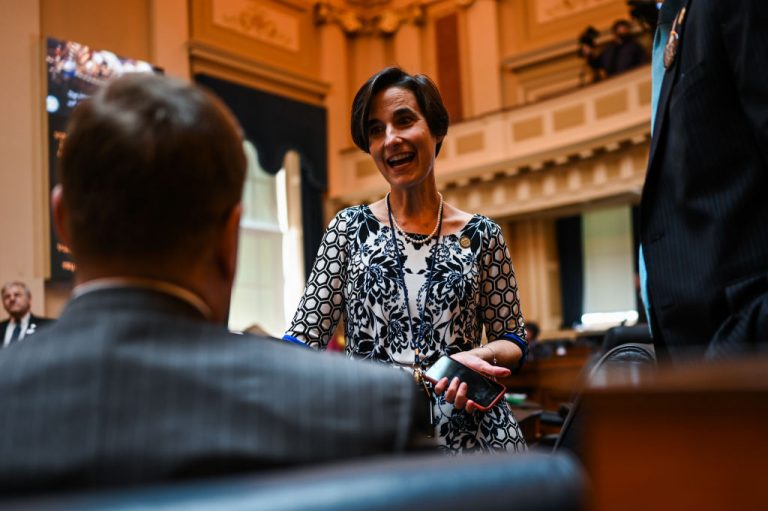 
A coalition of grassroots organizations gathered at the Virginia General Assembly on Tuesday to urge state lawmakers to pass campaign finance reform. While lawmakers have already rejected some proposals, multiple bills that failed in prior legislative sessions advanced out of committee. Others are up for consideration in the coming days.

During a press conference, advocates from half a dozen groups — including BigMoneyOutVA, Common Cause and FairVote — said passing legislation that empowers voters, promotes transparency and reins in the influence of big money in politics was important for good governance.

“Until we get to the root of some of these systemic problems, it’s really hard to address the real problems affecting Virginians,” said Heidi Drauschak, an advocate with BigMoneyOutVA and a Democratic candidate for a state Senate seat in Fairfax County. “We’re hoping that 2023 will be the start of some real change.”

Virginia’s laws governing political spending are among the least restrictive in the country, with virtually no limits on the amount of money state politicians can accept from donors, as well as loopholes that allow for the personal use of campaign funds. Under this system, total fundraising in state legislative races across the country more than tripled over the last two decades, from $38.9 million in 1999 to nearly $134.8 million in 2019, when adjusted for inflation, according to an OpenSecrets analysis of campaign finance reports.

BigMoneyOutVA has lobbied for 13 bills being considered by Virginia’s legislature that would impose limits on political contributions, prohibit foreign-influenced corporations from spending on elections and expand Virginia’s campaign finance disclosure laws, among other reforms.

A poll commissioned by the group in January 2022 found that 78% of Virginians agree something should be done to address the role of money in the state’s politics. Despite public support for reforms, proposals rarely make it out of committee.

Last week, the Senate Privileges and Elections Committee killed two bills that would have limited the amount of money state candidates can accept from a single donor to $20,000 per election and barred publicly-regulated utility companies from making political donations to candidates.

Reform skeptics argued that limits on campaign contributions would encourage donors to fund outside groups that are not subject to fundraising restrictions instead  of candidates, potentially making it more difficult to track political spending.

“When you squeeze money out of the regular campaign process, what you end up doing is pushing money into other places,” said state Sen. Jill Vogel (R-Fauquier) during a committee meeting last week.

On Tuesday afternoon, the same panel that rejected political contributions limits advanced a pair of proposals intended to restrict when state lawmakers may fundraise and how they spend that money.

Advocates applauded as the committee unanimously approved a measure banning the personal use of campaign funds, a practice outlawed at the federal level and in most states.

Modeled after federal regulation, the measure sponsored by state Sen. Jennifer Boysko (D-Fairfax) prohibits candidates from using political donations to cover any expense that would exist irrespective of their campaign or responsibilities as an elected officeholder. The bill specifies several unlawful expenses, including country club membership dues, rent or utility payments, and a mortgage. It was amended to allow for dependent care expenses.

An Associated Press investigation of the state’s campaign finance records in 2016 found some lawmakers frequently paid for expensive meals and hotel stays, as well as personal expenses like gas and cell phone bills, with money from campaign accounts.

“Virginia cannot continue to be a national outlier on personal use of campaign funds,” Jacob Moore, a political science major at the University of Virginia, told the committee in support of the bill. He noted that most states and the federal government limit the use of political donations for personal expenses.

Under the current law, state politicians are barred from using campaign funds for personal expenses only once they close out their accounts. Advocates have been trying to close the loophole since 2014.

The committee also approved a measure filed by state Sen. David Suetterlein (R-Roanoke) that expands restrictions on political fundraising during legislative sessions. State law currently forbids legislators from accepting donations only during the regular session. Suetterlein’s bill would prohibit them from fundraising any day the General Assembly is scheduled to meet during a special session.

The full Senate must now vote on the measures. If the bills survive, they will join two other reform bills that cleared the chamber earlier this week and head to Virginia’s Republican-controlled House of Delegates.

One measure would require political groups to disclose their top three donors on election ads. The other would mandate candidates for state and local office to file campaign finance reports electronically, with exceptions for those who lack the technological means.

The House of Delegates is scheduled to take up similar proposals introduced by its members in the coming days.