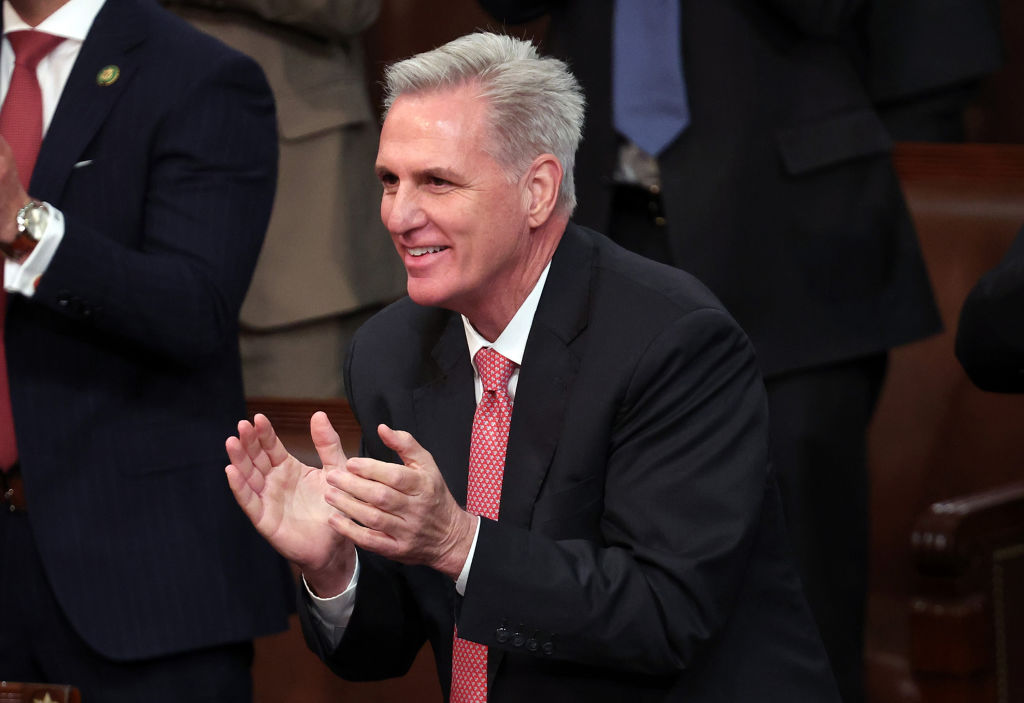 
The conservative advocacy group Club for Growth announced late Wednesday that it had reached a deal with the Congressional Leadership Fund — a hybrid PAC endorsed by Rep. Kevin McCarthy (R-Calif.) — “on support for Speaker Kevin McCarthy” as the U.S. House speaker battle enters its third day.

Voting resumed Thursday afternoon after McCarthy failed to secure enough votes to win the speakership on Wednesday evening after six rounds of voting, a historic stalemate not seen in the U.S. House since 1923. With a narrow GOP majority in the House, McCarthy can afford to lose no more than four Republican votes to win his bid for speaker. He’s reportedly working deals with the 20 Republicans who currently stand in his way.

In exchange for the prominent GOP advocacy group’s support, the Congressional Leadership Fund won’t spend any money in open-seat GOP primaries in safe Republican districts or give money to other outside groups to do so. Club for Growth has previously signaled opposition to McCarthy, releasing a statement on Jan. 2 opposing any speaker who did not agree the Congressional Leadership Fund should be prohibited from spending money in open GOP primaries or against a Republican incumbent.

Support from the Club for Growth could help clear the path forward with GOP holdouts concerned McCarthy and the Congressional Leadership Fund had backed more moderate candidates in open primaries.

“Kevin McCarthy is enlisting his big money allies to cut a deal to make him speaker. Candidates can not coordinate with outside groups on spending decisions, and the deep ties between McCarthy and CLF raise real questions about whether they’ve broken the law already,” Adam Smith, action fund director at the Democratic campaign finance reform group End Citizens United and Let America Vote, told OpenSecrets in a written statement.

Spokespersons for McCarthy and the Congressional Leadership Fund told the Washington Post that neither McCarthy nor any members of his team were involved in the deal between the super PAC and the Club for Growth.

“No one in Congress or their staff has directed or suggested CLF take any action here,” Club for Growth told OpenSecrets in a written statement, echoing the Congressional Leadership Fund’s press release.

The deal was also a big win for the Club for Growth, a perennial power player in Republican primaries — a position further protected by this agreement with the Congressional Leadership Fund. Since 2008, Club for Growth has spent over $115 million in primaries and special elections. During the 2022 election cycle, the group spent most of its outside money in GOP primaries.

Of the $69.7 million Club for Growth’s super PAC arm spent on federal elections during the 2022 election cycle, $39 million was spent during the primary election season. In addition to spending against Democratic senators including Sens. Catherine Cortez Masto (D-Nev.) and Mark Kelly (D-Ariz.) in swing states during the general election, Club for Growth spent $5.2 million against now-Sens. J.D. Vance (R-Ohio) and $2.6 million against Katie Britt (R-Ala.) in their respective U.S. Senate GOP primary.

Both Vance and Britt went on to win both the nomination and their general election races, but Club for Growth spent a total of $18.7 million against candidates who lost a primary or primary runoff during the 2022 election cycle. The conservative group succeeded in knocking out several GOP candidates in key primaries for Senate in North Carolina and Ohio as well as for the U.S. House in Oklahoma, Missouri, Florida and Georgia.

“This agreement on super PAC’s [sic] fulfills a major concern we have pressed for,” Club for Growth President David McIntosh wrote in a press release issued early Thursday morning.

The Congressional Leadership Fund has never spent money explicitly opposing a Republican incumbent during a GOP primary, according to OpenSecrets data. Any money spent supporting Republican challengers during the GOP U.S. House primaries were in Democrat-held districts.

Congressional Leadership Fund President Dan Conston stressed this point in the press release, writing, “CLF has never spent a dollar against a Republican incumbent before and obviously will continue that policy in the future.”

The hybrid PAC dropped $227.1 million during the 2022 midterm elections, making it the second biggest spender last election cycle. More than $214.4 million of that was spent in the general election on 95 candidates, with a success rate of 42% by candidate, according to OpenSecrets data.

The Congressional Leadership Fund’s mission is to elect Republicans to the House of Representatives, and it spent more money than any other group during the 2022 election cycle to help Republicans win back the chamber. But the lack of unity in the party displayed during the House speaker vote could make governing difficult once a speaker is elected.

The China Travel Restriction Has Nothing to Do With COVID Spread