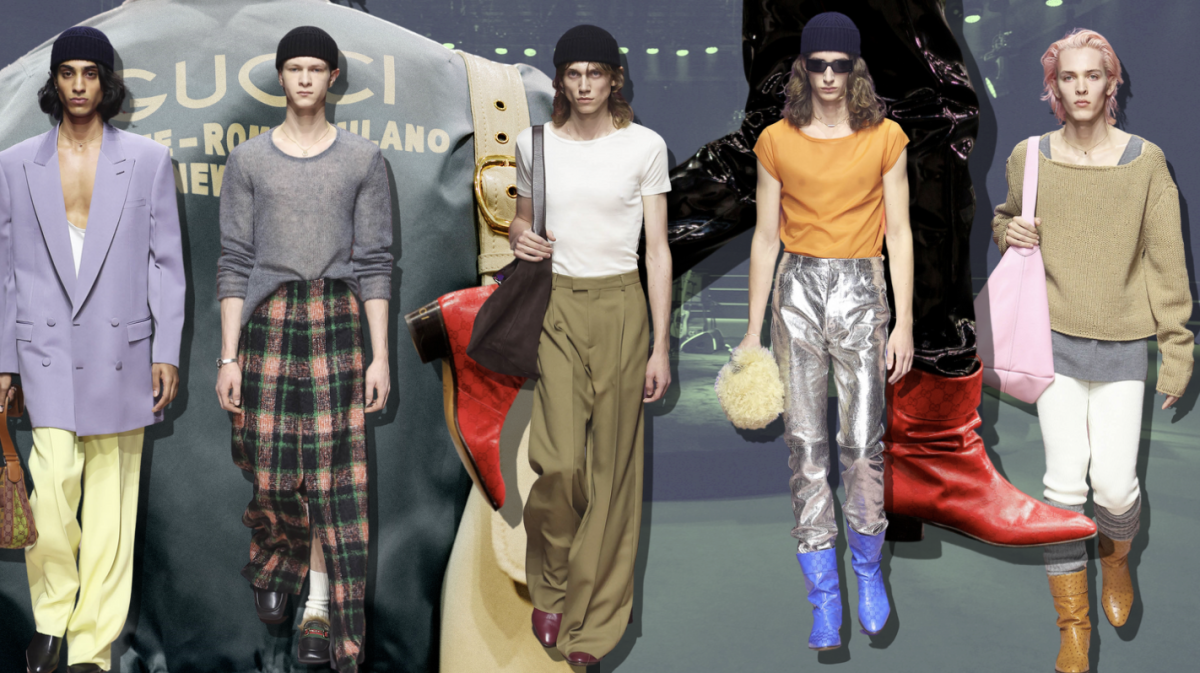 The show took place Friday in a dimly-lit roundabout theatre where the trio Ceramic Dog sat center stage playing rock music that got progressively louder and edgier as the show neared its close. In the show notes, Gucci said, “[the] circular formation [of the stage is] symbolic of the collaborative spinning wheel of the creative community at the heart of Gucci.”

As the first model appeared on the runway, the overall message of the collection was clear: Gucci is going back to basics. With a simple white, cotton T-shirt and a pair of mossy-hued slacks, the age of Michele and his unmistakable maximalist aesthetic came to an end. (Though his best-selling fur-lined slipper was featured in the show.) In fact, the collection drew from multiple pre-Michele eras of Gucci, highlighting archival staples such as the Piston Lock (originally created by Tom Ford), the Horsebit and the Cross.

The casual-ization of formalwear is the common thread throughout the looks. Boxy suit ensembles made their way down the runway in a variety of iterations. Double-breasted blazers and long suit jackets were laid atop more basic white tee shirts with raw, stretched-out hems — described as “improvisational styling” in the show notes.

Suits with detachable elements followed, enabling them to go from long-sleeve to short, or pants to cut-offs. Furthering the idea that masculinity can be malleable, specifically through dressing, the notes read, “The free and boundless facets of contemporary masculinities are observed in garments cross-pollinated – either in construction or styling.”

Perhaps most surprising was the incorporation of fashion’s favorite niche aesthetic of the moment: balletcore. Muscle tank tops were layered under loose, off-the-shoulder knits and leggings were tucked into none other than leg warmers — not to mention the oversized bags big enough to fit all your dance-class necessities.

Though the collection includes a few confusing additions (see: the oddly slouched boot that looked very uncomfortable to walk in), any goal of drawing a harsh line between Michele’s Gucci and what comes next was certainly achieved.

As the industry anticipates the brand’s upcoming womenswear collection, only one question remains: Who will be chosen to officially lead Gucci into its new chic, sexy and minimalistic era?

Browse the full collection below.

Please note: Occasionally, we use affiliate links on our site. This in no way affects our editorial decision-making.

Want the latest fashion industry news first? Sign up for our daily newsletter.

Want To Feel Sexy And Empowered While Wearing The Most Comfortable Lingerie? Lounge…