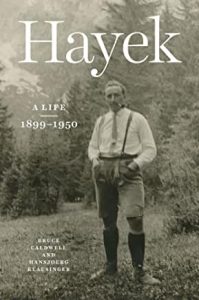 
Christmas has passed in the usual blur of social over-eating, but I’ve found time to retreat and finish Hayek: A Life 1899-1950 by Bruce Caldwell and Hansjoerg Klausinger. As the authors state, they intended this to be the definitive biography and they have achieved this ambition. Not only do these 700+ pages (plus references etc) constitute only the first part of Hayek’s life, up to his move to the US, the account is based on deep research and familiarity with the mass of sources, primary and secondary, available.

Now ‘definitive’ also has its downsides, only one of which is mustering the strength to hold the book up to read it. Another is that parts of it just aren’t all that interesting: I was held by the story of Hayek’s late-Austro-Hungarian empire childhood but really not at all by his love life. This unfortunately includes his dreadful behaviour in divorcing his first wife after the second world war in favour of his childhood sweetheart, which – as it’s the final chapter of this volume – leaves one with a very negative impression of Hayek the human being. Still, it’s easy enough to skip these chapters.

However, the other downside – at least for one not deeply immersed in Hayek or Austrian School economics – is that it’s quite hard to follow the thread of the intellectual narrative. While ‘The Use of Knowledge in Society‘ is one of my all-time favourite economics articles, and I read ‘The Road to Serfdom‘ back in my undergraduate days, this isn’t my background. So while I did enjoy reading this biography –  particularly the section about Hayek’s intellectual formation in the early 20th century Vienna of logical positivism, and those about his presonal/intellectual rivalries particularly with Keynes during his years in England –  I’d be hard pushed to give a capsule description of what I’ve learned. So I will look forward to Volume 2, the Chicago years, but also to the eventual concise one-volume version of this definitive work.