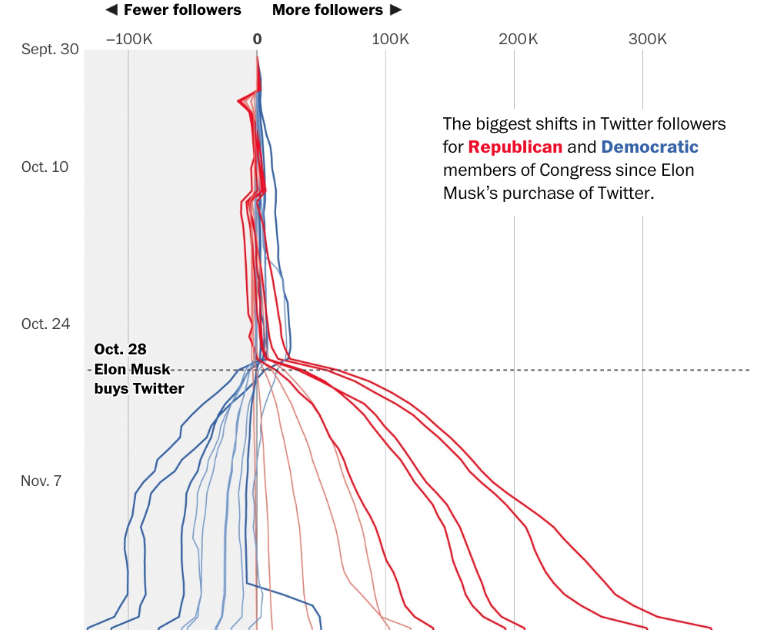 Idealism and pragmatism in visualization 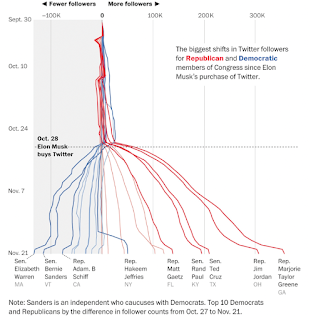 Some reactions to the Washington Post chart on the right, designed by my former student Luís Melgar, reminded me of a passage from The Art of Insight that I shared the other day. This morning, a few readers of this chart asked in social media: “Why isn’t time on the X-axis?” implying that there’s something wrong with that, as it breaks some convention or rule.

A better question might be: “Can you understand the chart anyway?” I bet you can. It may take a few more seconds than usual, but does that make a significant difference when you might gain something else? What makes a graphic good isn’t whether it tries to approximate an ideal of truth, beauty, goodness, or excellence; rather, it’s whether actual people can make sense of it, learn from it, or enjoy it.

A follow-up question could be: “Do you think that sometimes there are good reasons to flip the axes of a time-series chart?” There might be. In this case, I believe, the reason is rhetorical: to emphasize the left-right partisan divergence. We may agree or not with the choice of flipping the axes, but it’s a choice that can be justified, discussed and eventually tested.

The following is the entire page from The Art of Insight where I talk about the difference between idealist and pragmatist discourses in visualization. I’ve shared this very early draft on Mastodon, so let me know what you think there, if you wish:

My conversation with Ed Hawkins made me think about the ways that visualization professionals and scholars talk about what we do, and why we do it. The first thought that came to my mind relates to a question I often get in classes and workshops:

What are the rules of data visualization?

I was born in Galicia, Spain, and we Galicians are well known for replying to questions with even more questions, so I often ask in return:

What are the rules of writing?

I find these questions nonsensical. Beyond a certain and flexible observance of the symbols and the grammar of the language we employ, there are really no universal rules for writing that are applicable to all kinds of writing regardless of purpose, context, or audience. Why should it be different for information design —which includes data visualization?

This misconception about the existence of rules in data visualization is in no small part due to the inheritance of what I call  “the Tuftean consensus,” after Edward Tufte, author of several very influential books, the best among them being The Visual Display of Quantitative Information (1983).

In The Infographic: A History of Data Graphics in News and Communications (2020), Murray Dick describes various discourses that have shaped how professionals and scholars talk and think about data visualization. The first is the functionalist-idealist discourse; Tufte is the most widely read exponent of it, although Murray also cites several other statisticians, mathematicians, and cartographers, such as Jaques Bertin, author of the foundational Semiology of Graphics (Sémiologie Graphique. Les diagrammes, les réseaux, les cartes, 1967.)

This discourse has been dominant in visualization for decades, but alternative ones are rising. The functionalist-idealist discourse, Dick explains, conceives of visualizations “first and foremost as a scientific methodology” and as a form of “visual logic, and the rigorous application of a monosemic system that depends on a priori rules (present in standards, and in conventions, such as the use of grid lines, legends, labels, etc.) These provide a means by which signs may be used to connect propositions in a logical sequence.”

According to Dick, to someone who favors the functionalist-idealist discourse “graphics necessarily deal in complex, multivariate ideas and they must explain clearly and efficiently: “telling the truth about the data.” And then he adds an important line: “The notion that designer and audience may not share a common and irreducible understanding of what “the truth” means is not countenanced.” That’s why Tufte can proclaim in his books that “if your statistics as boring, you’ve got the wrong numbers,” or that “the only worse design than a pie chart is several of them.”

Saying that pie charts are bad regardless of the context in which they are used makes sense only if you are an idealist, as idealists usually first come up with ideals of Truth, Good, and Beauty first—Tufte never uses the term “rules”, but he has defined a series of uppercase “Principles of Graphical Excellence,”— and then they proceed to judge visualizations according to those principles.

I respect the functionalist-idealist discourse, as I see its value, and I’ve learned a great deal from reading Tufte, Bertin, and many others who favor it. However, even if I have used such discourse myself —Murray Dick’s discourses aren’t mutually exclusive; the same person can use different ones depending on the circumstances,— I often talk about visualization in a different way. The infographic says that the discourse I usually employ is pragmatic; this book is no exception. Such label encapsulates the essence of my ideas.

Instead of a hierarchical, top-down professional landscape where authoritative figures assemble lists of rules or principles and cast wisdom on the masses, I’ve came to favor instead a horizontal field driven by conversations among kind and collegial peers—a community of friends, in the ancient sense of friendships of utility and pleasure. I also believe that it’d be better if we taught and talked about visualization less in terms of rules, and more in terms of ad hoc justification and reasoning.

This reasoning should be informed by aims, constraints, trade-offs, outcomes, and by an ever-imperfect but ever-evolving body of scientific knowledge; or sometimes simply by personal experience and taste. We should also keep in mind that a key goal is to somehow benefit an audience —which could be just the designer of the visualization alone— in one way or another; “benefitting,” by the way, doesn’t necessarily mean getting the more information as possible in as little time as possible.

In other words, my discourse tends to be not just pragmatic, but also pluralistic and hedonistic.

Stop Worrying About All Those Tech Layoffs…