The sun is shining on singer Joyce Wrice, who sits across from me at Dumbo House, clad in a fur coat, leather pants, and sleek bun. Wrice has just returned from Japan, where she spent time with her family, in addition to going on a mini-tour around the country. “I feel head over heels that I finally got to go back,” she says. “ Surprisingly, I don’t really feel all that jet lagged or tired.”

That’s because Wrice, whose musical sound and personal style is reminiscent of the early 2000s era of R&B, is running off of pure adrenaline. Since releasing her debut album, Overgrown, in 2021—which features artists such as Masego, Freddie Gibbs, Umi and more—Wrice has noticed her growth as an artist. “I’m becoming less self-conscious and worried about whether or not people will like what I put out,” she explains. “I’m mainly focused on the kind of music I want to make. I’m having more fun and putting less pressure on myself.”

This energy is present on her new D’Mile-produced EP, Motive. The tracklist is filled with songs that will make even the dance-averse want to move their bodies (think: tracks you’re likely to hear on the Honey soundtrack.) “We’ve all been through so much lately,” says Wrice. “I just wanted to make something that uplifts people and gets them dancing and feeling good,” she adds. And Wrice did exactly that: from tracks like “Lookin’ For Ya,” that make you want to ride in a drop top with your girls, to the striking visuals for the single, “Iced Tea,” which features Kaytranada. “I think a lot of people envisioned a summer time dance video for this track,” Wrice admits. Instead, she pulled inspiration from Aaliyah’s “Try Again” video, Kill Bill, and Wrice’s Japanese heritage. “I thought it would be fresh and unpredictable to go this route,” she says. “And, in general, this single really inspired me to create a whole EP filled with upbeat dance songs,” she says. “It’s just my desire to get people moving.” 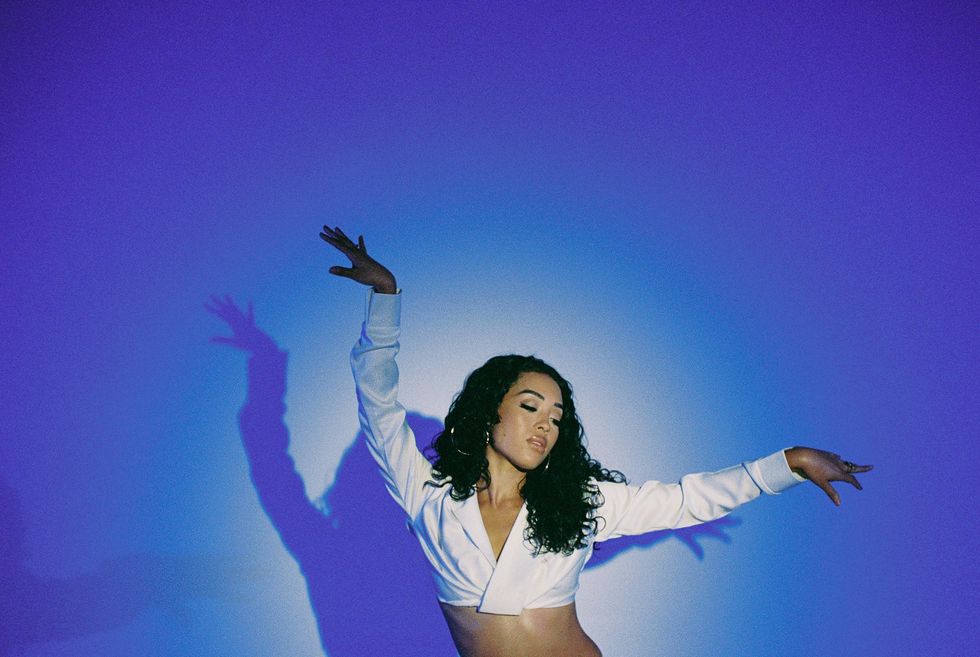 You might also recognize Wrice from Tom Bogo’s NYFW SS23 runway show. “I’m definitely interested in doing more runways. It made me want to up my style game,” she says of the experience. Or perhaps you know her voice from The Proud Family reboot, Louder & Prouder’s, new theme song. “When they reached out to me I was super honored. I grew up watching the show and it was super important to me,” she says. “The theme song is iconic and untouchable. Coming after Solange and Destiny’s Child was such a dream come true,” she says. “It’s funny because I had been praying and writing on my altar that I wanted some sort of film or TV opportunity,” she says. “A week later, I got this email.”

And speaking of other manifested dreams, more recently, Wrice’s first NPR Tiny Desk concert went live. Wrice’s delicate vocals floated over a melange of piano, guitar, and drums. Wrice’s striking look—sleek edges, ponytail, and a three-piece white set—didn’t hurt either. “I’m really happy with how it turned out,” she says. “The feedback and the love has been amazing. I’m just very grateful,” Wrice adds. “Leading up to it, I was super nervous”. After being on tour with R&B artist Lucky Daye she admits that it put a strain on her vocal cords. “This new lifestyle has been a little bit of a shock to my body. I was working through a lot of vocal cord damage ahead of this and so I was a bit worried,” she says. “But it all worked out. I think I thrive in a more stripped down and intimate setting with instruments, rather than big shows with tracks.” 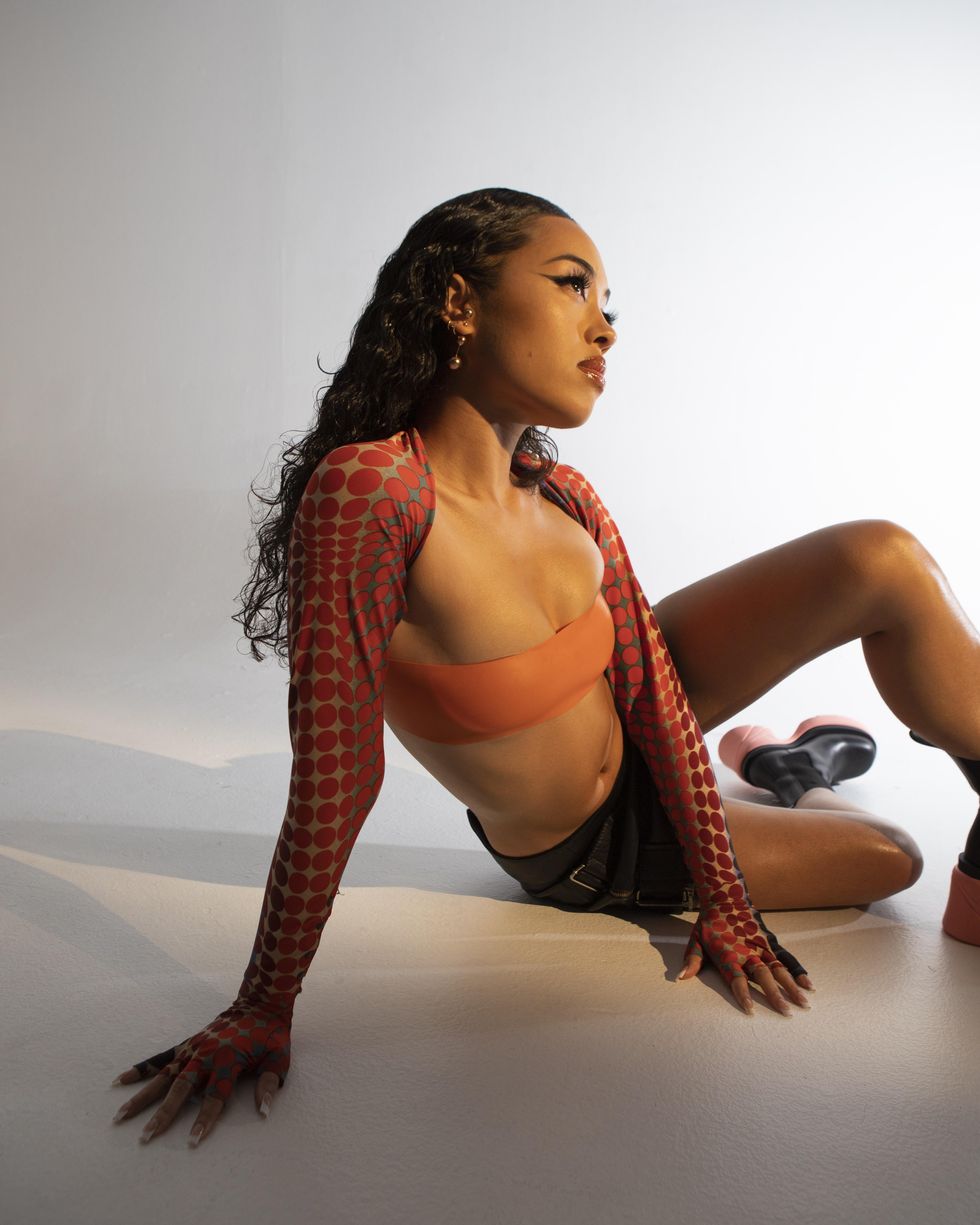 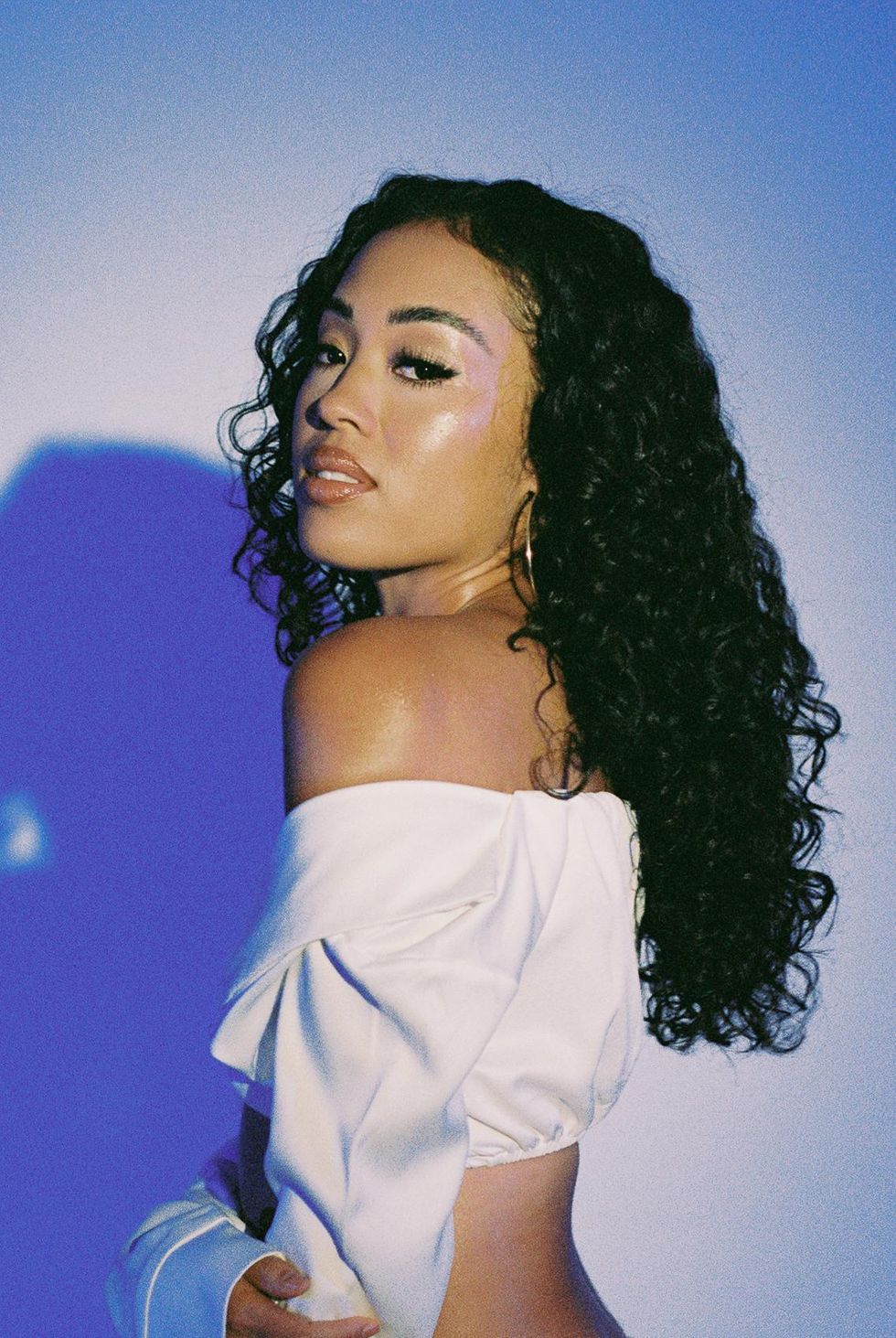 Wrice certainly held her own during her first major tour with Daye, thanks to all the “intense prep” she put in leading up to it. “I was either taking voice lessons, exercising like crazy, learning choreography, or working with my music director on the set arrangement,” she reflects. “But it was fun. I genuinely love doing those things,” she says. “I can definitely be a little bit hard on myself. But it’s because I want to give everyone a great show.” With this high level of intensity, Wrice has learned the major role that self-care plays in staying balanced. “Sometimes there was no time to get good rest,” she says. “I leaned heavily on journaling, my Buddhist chanting, and mouth tape,” Wrice adds, “which helps to promote nasal breathing and actually puts you in a deeper sleep.”

In addition to going for walks, cardio workouts, and gratitude lists, Wrice’s Buddhism practice still remains at the core of what keeps Wrice grounded. “I’m just leaning into whatever makes me feel good lately,” she says. This also means further embracing the world of beauty, too. “I grew up in a home that reminded me to embrace my natural beauty,” she says. “My mom never told me I needed to look a certain way. She just let me be,” she says. One of her favorite beauty memories is with her grandma. “She taught me a lot about good skincare,” Wrice recalls.

Although Wrice opts for a natural look, “I’m someone who definitely can’t leave the house without doing my hair,” she says with a laugh. “No matter what’s going on, if I have bags under my eyes or whatever, hair changes everything whether it’s down or in a bun or braids,” Wrice adds. She leans on a good curl serum and a Davines mask to keep her curls healthy. “I also go to the Blow Me Away salon in LA. They really helped me get my scalp right because I had a lot of thinning and buildup from all of the performing,” Wrice explains. “But even with makeup I’ve been inspired to try new things lately,” she says. “I love the idea that I can express myself artistically not only through music, but also through makeup as well,” she says, adding that she looks up to artists like Aaliyah and Missy Elliot for their multitude of expressions: from their undeniable musical talent to their iconic hair and makeup looks.

The rising star’s success didn’t happen overnight. She credits her passion for music to her upbringing.. “My mom really loved music when she was growing up,” Wrice says. “She would go to the discos in Japan all the time and dance. She also collected records,” she adds. Wrice’s favorite artists growing up were Luther Vandross and Minnie Ripperton. “My dad also loved music. He can sing really well,” she says. “He would drive me around when I was little and blast music with the top down,” she adds. “They both definitely influenced my ear.”

Upon graduating from Soka University, she originally thought she wanted to pursue a career in special needs education. “I love education,” she says. “But I knew my heart wanted me to do something a little bit more creative. I thought it was now or never,” she adds. She moved to LA and began working with writers and producers there. “So many of my classmates were also encouraging me to pursue this career in LA. That really convinced me to move and go for it,” she says. “Buddhism is also all about living a life with no regret and fulfilling your purpose. I knew I had to at least try because of this.” Even though her parents weren’t fully supportive at the time, Wrice took what very little money she had and moved to LA from San Diego. “It was such an adventure for someone who was a bit sheltered as a child,” Wrice adds of the hustle that required multiple side jobs in order to invest in this career choice. “Thankfully, I organically created genuine friendships and working relationships that kept me grounded and hungry despite the ups and downs.”

Thanks to her following on YouTube and SoundCloud, Wrice’s music gained traction at a steady pace. “I’m so thankful that my supporters have been on this journey with me since the beginning,” she says. “This process, especially as an independent artist, can be very daunting at times but I understand that great things take time and everyone has their own journey. So I’ve learned to appreciate and trust the process, have fun and do my absolute best.”

And the leap of faith she took is certainly paying off. “I just want to keep getting better. I want to do bigger shows. I want to work on a sophomore album,” she says. “I have a little notebook, so I’m definitely always collecting my thoughts and ideas.” But most of all, she’s learned, “it’s so important to know who you are and to stay true to yourself,” Wrice says. “I’m so happy that I’ve learned to trust my own timing. There’s no reason to compare. I’m just here to fulfill my dreams.”

Pardeep Narwal Is The First Raider In PKL History To Accumulate 1500 Raid Points.

Want To Feel Sexy And Empowered While Wearing The Most Comfortable Lingerie? Lounge…