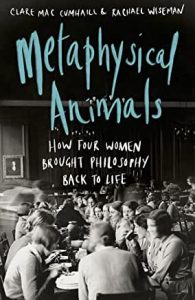 
I really enjoyed reading Metaphysical Animals: How Four Women Brought Philosophy Back to Life by Clare Mac Cumhaill and Rachel Wiseman. It’s one of two recent books about the quartet Elizabeth Anscombe, Philippa Foot, Mary Midgley and Iris Murdoch, all philosophy students at Oxford just before and during World War Two, and remaining close in the postwar years as they began their scholarly and writing careers. (The other is The Women Are Up To Something by Benjamin Lipscomb, which I haven’t read yet.)

Unsurprisingly, the book is about philosophy rather than economics. I did PPE at Oxford and felt pretty hopeless at the philosophy despite doing ok in exams. We were taught the British tradition – Locke and Hume – and modern linguistic and analytic philosophy – Ayer and Hare. The four women didn’t feature; I’d heard of Irisl Murdoch only, and only for her novels. So I think this implies that the subtitle is perhaps wrong: at least from my perspective, the four might have halted the onward march of reductive positivism in philosophy, but they lost the war.

I was particularly struck by the description of how the shockingly male and misogynist Oxford philosophy establishment reclaimed territory when the men returned from war. “If undergraduate classes before the war had been full of ‘clever young men who liked winning arguments,’ … graduate classes were now led by such men and full of others who were being specifically trained in modern methods and hothoused for a profession that would reward cleverness, quickness and agression.”

Well, hello. Isn’t this the story of economics too? Both disciplines have painfully low proportions of women (and others from backgrounds where people are not automatically taught the confidence needed to put on a show of clever, quick and aggressive). Both are still like this. The culture and make-up are mutually reinforcing. There won’t be a quick solution if any, but the struggle of these four philosophers is inspiring. As is that of all the women of their era who fought to be able to wear trousers if they felt like it, and above all get the same education and scholarly opportunities as the men.