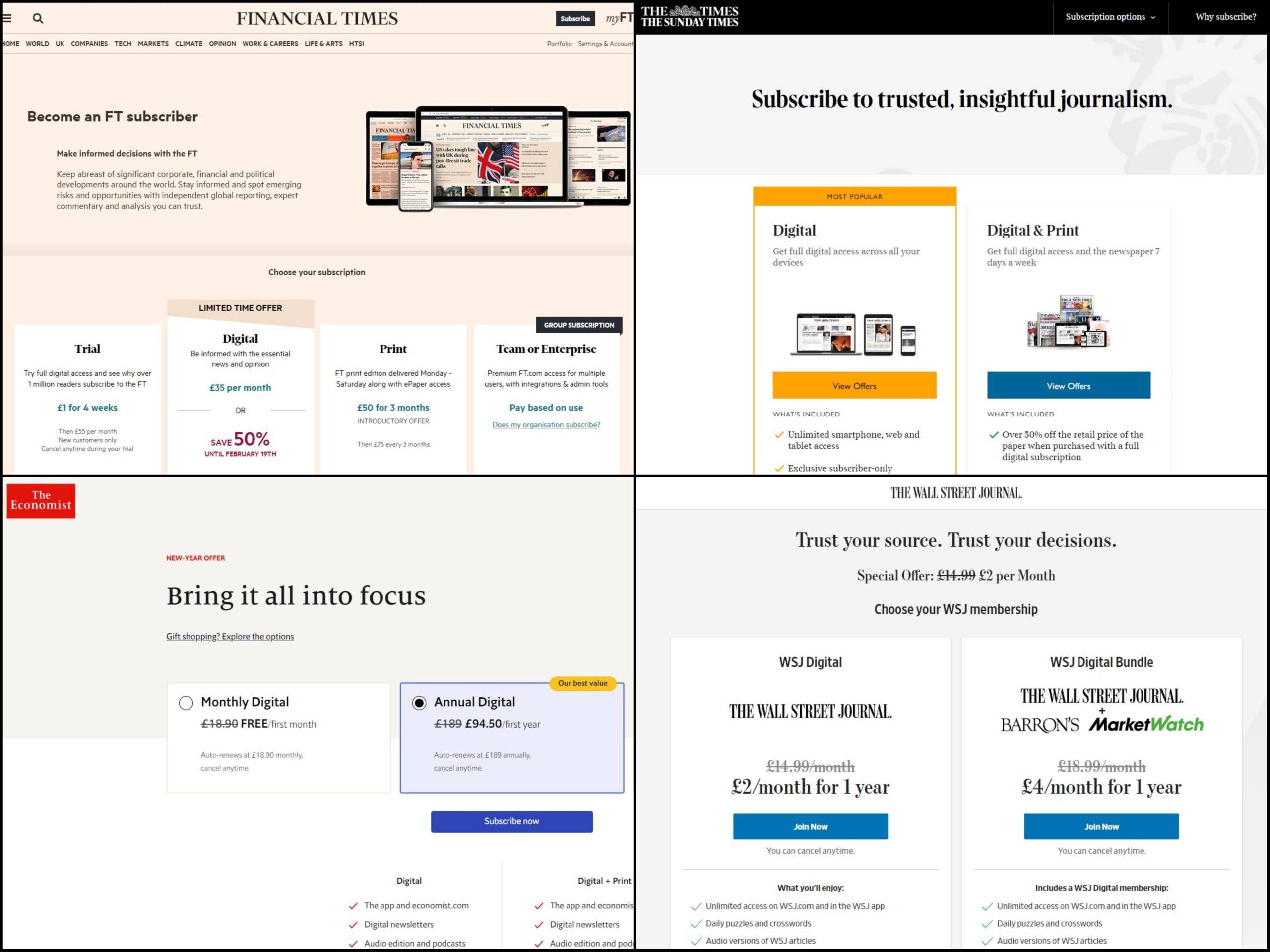 
The Financial Times is the most expensive consumer digital news subscription in the UK or US, closely followed by The Times.

A full-price digital subscription to the FT costs £319, while The Times is £312.

The next most expensive digital news subscriptions are a big jump down in price: Bloomberg is £199 per year and The Telegraph is £189.

Also £189 is The Economist, which leads the magazine market on digital subscription price.

Press Gazette’s comparison of digital subscription prices ranked publishers by their full annual price, ignoring any trial or sale discounts. The prices used in this comparison were correct for a UK consumer on Monday 23 January 2023.

We only looked at paywalled websites, or those such as The Independent with a large amount of premium content, rather than those that are entirely free-to-read but offer something extra such as an ad-free experience to those that choose to pay.

The cheapest national news offerings come from the Washington Post (£60 per year) and the i (£54.99).

Where applicable, we chose the standard unlimited digital access option rather than a premium subscription with, for example, bonus logins, an e-newspaper edition or ad-free reading.

Comparing monthly prices creates a slightly different picture to the annual ranking: Bloomberg is higher than The Times at £29.99 versus £26, while the Wall Street Journal (£14.99 per month) overtakes The Telegraph (£12.99).

There are fewer UK regional news outlets (including non-UK-wide titles like The Scotsman and Irish Times) experimenting with paywalls compared to the national market.

National World titles such as The Scotsman and Yorkshire Post are top of the pack price-wise on £119.90 per year.

DC Thomson, which in October celebrated reaching 25,000 digital subscribers to its Press & Journal and The Courier newspapers in Scotland, sells those packages for £59.99 per year while Mediahuis-owned Belfast Telegraph, which has achieved around 8,500 paying digital-only subscribers since the launch of its paywall in May 2020, sells online access for £49.99 per year.

Although we excluded trial prices, some publishers do make steep use of initial discounted prices. For example, the FT has a discounted annual price of £159 compared to its full price of £319 while Washington Post has an offer of £20 down from £60 for a year.

The New European and The Atlantic were the only publishers not to offer a discounted trial offer.

See the full comparison of annual and monthly subscriptions, plus details of the different trial offers, below:

If we left your news outlet off our list and you feel they should be included, please get in touch with [email protected] and we will add you if appropriate.

Email [email protected] to point out mistakes, provide story tips or send in a letter for publication on our “Letters Page” blog

How Our Cells Strategize To Keep Us Alive