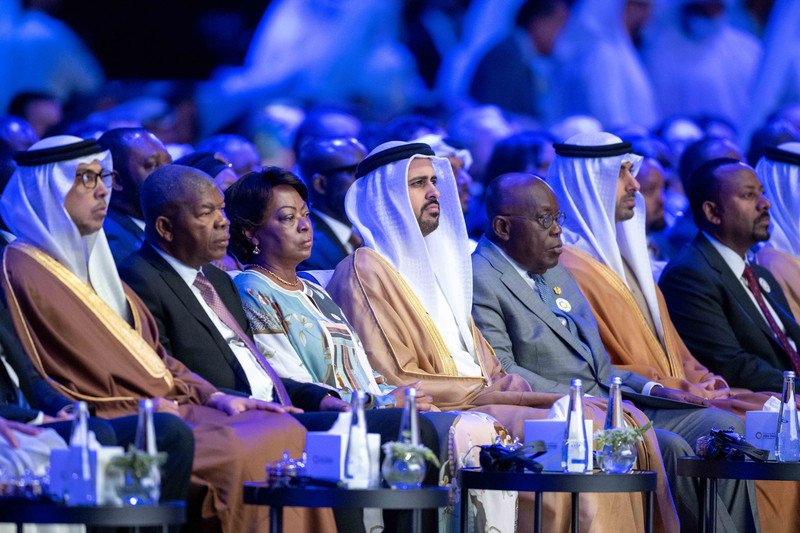 Barreling down a highway towards Abu Dhabi at 4am still groggy from my flight, the driver casually waved his hands towards a flickering in the distance. As we swerved around the bend a lone windmill appeared. Its blades blasting red, blue, and green lasers down on a post-apocalyptic junkyard. Framing the sun-stricken wreckage (apparently a themed restaurant) was a sign flashing the words: The Last Exit.

A fitting omen, I thought, if a bit on the nose, because I was invited to attend the official launch event of the UN Climate Summit (COP28) hosted in Dubai later this year. And many consider it humanity’s last chance to kickstart climate action and prevent the world from looking like this restaurant.

When the invitation came, I wasn’t sure I should go. A tech-focused business event conceived in 2006 to brush up the green credentials of a petrostate seemed like a dubious thing to spend my time on. But I had been looking for a way to learn from our non-EU Eurasian compatriots how they perceive the world in which we now live, so I decided to take the plunge.

City of the Future

A few hours later and even groggier, a bus took me on a guided tour to Masdar city, Abu Dhabi’s sustainable quarter named after the gulf state’s giant renewable energy company at whose behest I was here. Construction of Masdar city started in 2006. It was supposed to house 50,000 residents and serve as a model for a zero-carbon city and revolutionise thinking about the built environment.

But the residents never came, and it has now been revamped as a start-up valley.

The only route to get there is by highway which cuts through Khalifa city, a walled-off working-class neighbourhood subdivided by blocks of identical sand-coloured buildings. On the other side of the highway, skyscrapers and beachside resorts towered over the low-rise — a model of how not to design a city. “It’s where all the taxi drivers live,” the bus driver from Pakistan told me. “Five per room. No privacy. But it’s okay, sir. There is no corruption.”

Masdar City was completely empty when I arrived.

Western-looking cafés and restaurants were all open for business, but there was no clientele in sight. And one restaurant still had price tags on its furniture.

Unlike virtually every other part of Abu Dhabi, Masdar City is made for walking. There is also a small fleet of driverless pods that ferry people around, but with occupation rates at very low levels (only a few thousand people work here during the week), this has reportedly been scrapped.

I wonder why they’ve taken me to a place that by the looks of it has failed so utterly. But apparently, US president Joe Biden had visited when he was vice president to Barack Obama. “Terribly impressed,” he later tweeted. “A true green print for cities of the future.”

After checking some more restaurants for price tags, I was ushered into a showroom filled with delicious Arabian, French and American snacks. An African man whose job it was to open the door welcomed me. A South-Asian-looking man whose job it was to push the button for coffee gave me coffee. And men wearing white Kandura’s, all directors at Masdar, sat at a large table listening.

“We’re going to send graphene to the moon, all right?” an American man said with confidence. He held a bucket of grey matter carefully taped shut. I had seen it before.

Graphene was first isolated in 2004, and due to its properties — it’s 200 times stronger than steel and doesn’t weigh a thing—it was envisioned to revolutionise construction and drastically bring down the environmental impact of cement. The EU even launched a €1bn Graphene Flagship in 2013, hoping to win “the global graphene race.”

Nearly two decades later, it still holds that promise but has yet to prove its worth. Not to say it won’t, but breakthrough technologies have a way of not quite breaking through for decades. Fusion is another example. So is green hydrogen.

That is why I was slightly unnerved to learn that the UAE wants to become a global leader in green hydrogen and wants to use the UN Climate Summit as a launching pad for this ambition.

Green hydrogen has been described as the “swiss army knife” of the transition and can be used to clean up certain types of industrial production processes. But high costs have prevented its development, and like graphene, it doesn’t exist yet outside of a few pilot projects.

Read up on the UAE’s hydrogen strategy here.

Going all in on green hydrogen may help scale up the technology. But it’s a high-risk gamble, and the overtly commercial nature of this year’s summit has raised some hairs among climate advocates.

As it turns out, Europeans and Emiratis view planetary collapse through a different lens—demarcated by the fact that the EU is going through an energy crisis and the gulf states are experiencing the first oil boom in over a decade.

It was therefore perhaps unsurprising when Sultan Al Jaber, an Emirati oil CEO who had just been elected director of COP28, emphasised economic opportunity at the opening event. “We all share the same climate,” he said against the background of a giant blue tree made of lasers. “But I believe we can turn the greatest challenge we face into the opportunity of our lifetimes.”

To achieve a “just transition for all,” he said, the UAE aimed to set out a path to a “high-growth destination” and invest its petro-profits in “breakthrough” technologies.

To my ears, it seemed pretty basic ‘solving problems through growth and innovation’ fare, but the gulf state has set a hard target: 100 gigawatts of green energy by 2030 (about a quarter of the EUs current solar and wind capacity), 25 percent of which will be used to create ‘green hydrogen.’

And according to secretary-general of the World Energy Forum Angela Wilkinson, one of the most powerful voices in energy, Al Jaber is the real deal and a “visionary leader.”

Although Wilkinson admits “throwing money and technology at the problem” will not solve all the issues — the UAE has not committed to phase-out fossil fuels — she suggests Europe and the US could use their financial clout as leverage to get the Global South along with petrostates to increase their ambition. “Global leadership is about learning what other countries aim for and what their stories are, not dominating them and telling them what the answer is,” she said.

Part of UAE’s story is that it wants to “reverse emissions” and expand oil production at the same time, which is why many climate advocates have sounded the alarm.

In the coming years, the gulf state has earmarked $127bn [€116bn] in new fossil-fuel production, which will increase output from four to five million barrels per day by 2027.

UAE officials insist they can compensate for these newly-created emissions by exporting renewables and green hydrogen. But this claim is not supported by the International Energy Agency, and climate advocates have pointed out there’s nothing new about petrostates hedging on renewables while maximising oil profits.

In Sharm el Sheikh during COP27, petrostates made sure the phasing out of oil and gas could not be discussed and held it off the official agenda. But corruption or cynicism may not tell the entire story. It’s also fear. “Without oil, we have nothing,” a delegate from a gulf state told me.

The problem is that it doesn’t matter. In a widely-shared rant, former US vice president Al Gore speaking (or yelling) at the World Economic Forum in Davos, Switzerland, last week, reminded the room the planet only deals in hard limits and irreversible tipping points. There is no room for stories and excuses, he said: “We have got to stop using our atmosphere as a sewer.”

On my way back, I looked out for The Last Exit. I had learned the windmill overlooking the rust-and-petrol-themed restaurant was a replica of a 19th-century model produced by the Aermotor Windmill Company.

The company still exists and is now owned by a group of fiercely patriotic west Texas rangers. Although a small player in the energy game nowadays, when it was first introduced in the 1880s it transformed rural life in the United States. First as an irrigation device and later as a source of electricity, until it was made obsolete by the onslaught of cheap oil and gas by the mid-20th century.

It made me think of the little-known prehistory of renewables that existed before the fossil era. Like the solar-energy device that impressed judges at the 1878 World Exposition in Paris by creating ice with the power of the sun; like early electric cars that outcompeted petrol-driven models and were spread widely enough to have had their own ‘golden age,’ cheap modular Aermotor windmills tell the story of a history interrupted.

As a schooled historian, I have found history can act as an antidote for hype, and I was reminded not to put too much credence into the need for breakthrough technologies to save the day. We have but to pick up the thread that has been there all along. Although if we had, the United Arab Emirates most likely would not have existed.

EUobserver was in Abu Dhabi as part of an expenses-paid trip by Masdar Clean Energy.